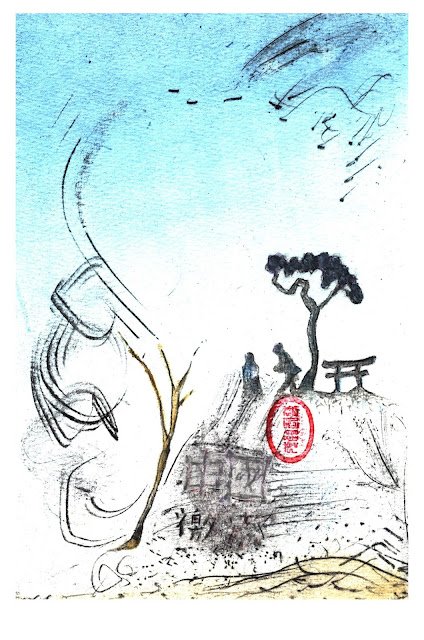 Yesterday I burned the toast
so I went down to the rapids.
It was not a bright morning.
Close to shore a small twig
spun on an eddy. The eddy
was frilled like a doily, and seethed.
The twig was helpless to go anywhere
except around and around.
On the horizon plumes of smoke
rose like poplar trees. There was
the sun, punched into the sky
like the sky's navel. The river,
pricked and lifted by windhooks.
Mist puffing up, the sky black then white.
Columns of air I could have walked
like pathways to waiting jets,
walked into the skyhold. I'm telling you:
then the river reared up like a dragon,
scales flapping, the sun, smoke,
the far faint islands, all
collapsed in the froth of its lashing.
I had never been so small,
atomic. I was tossed. I have to
say "maelstrom." I wanted out.
I wanted time to turn back.
When I felt the ground again I was
shaking. It seemed I could reach
in any direction and touch the opposite
shore, the islands, the mist and smoke.
The gaps among things had closed.
I'm telling you this because I have not
been able to separate them, and now
all wounds are nothing, are blips,
leaf-loss. Nothing resists.
When I leave, understand, I will not be gone.

from Twenty Views of the Lachine Rapids (Gaspereau Press, 2012) and The Rapids (Brick Books, 2012). Image by Klaus Pfeiffer.
POEMS