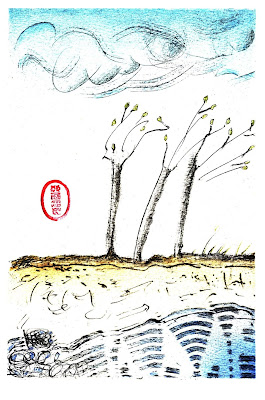 Above the calm air—immaculate, actually—
a more restless, nervous air accumulates
and knocks the highest limbs of the tallest trees
startling birds, snarling invisible
ropes of sky, I know it by
the barely audible swishing sound
over the rapids’ racket, which if I had
my ears plugged like everyone else
I’d miss, too. None of this however touches
me, strolling gently the gravel paths
down low by the river
if by touches I mean on the skin, and if
by skin we don’t include the eardrum.
Little tympanum, I love what you give me
in a typical day, wind I’d otherwise only know
by chill or eye, birds deep in cedar.
And who alert to the stink of arrival
hasn’t heard a shadow? But look—
this spring the standing waves—
glassy-skinned, vociferous—
push higher than ever into the air
under the wind, into liqueous wind.
The eddies gleam like rubbed shells,
each with the shape of another
dear friend lost or departed, carved in relief,
full of intent and vortical pull, our lives.


from Twenty Views of the Lachine Rapids (Gaspereau Press, 2012). A later version of this poem appears in The Rapids (Brick Books, 2012)
Image by Klaus Pfieffer
POEMS